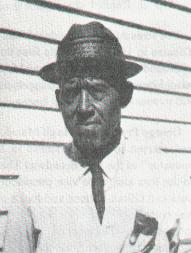 He was 17 and in the ninth grade when he began service for Grant and Carolyn Foreman in 1916. Presley heard about the job through his uncle W. C. Esco, a friend of Judge Thomas.   Back then, the home was on the edge of town and Presley milked the family cow, fed 250 chickens and 175 pigeons and cared for the large yard, and also kept an eye on things at the Foreman home while they traveled during the summer months.
Presley was born in Broken Arrow and came to Muskogee with his parents in 1908 when there were no paved streets and 12th Street was considered out in the country. He attended Tullahassee Mission School and Muskogee schools.
Working and finishing his education wasn’t too difficult for Presely because he had grown up on a farm where there were eight to ten cows to milk every morning and evening.  The Foremans only had one cow.  A good student, when he graduated from High School the Foremans encouraged him to go to Meharrys Medical College in Nashville where he studied dentistry.
Paying his way through college by waiting tables and working summers as a Pullman sleeping car porter on a run from Chicago to Portland for the Chicago, Milwaukee and St. Paul Railroad, he enjoyed traveling to large cities.
Setting up an office in Bristow in 1927 after taking the general board, he struggled for a few years then returned to Muskogee where the Depression brought an end to his dental career. In Muskogee he worked with a Dr. Wallace for a short time but when the Foremans decided to take a trip overseas they asked him to stay at their house as a caretaker.  He decided to take the job.
The Foreman’s came to depend on the quiet, man as the years went on.  Their dependence was so great that Grant Foreman went to great lengths to get a deferment for Presley when World War II broke out.
Presley lived in the out building on the property until marrying his wife Irma in 1943. After that he rode his bike or walked to the Foreman home each day.
Cooking was another of the chores handled by Presley at the request of Carolyn Foreman.  Although he had no special training or instruction, he managed to prepare good food regardless of what was ordered.  Carolyn was very frugal, keeping supplies in locked cabinets.  She was also very particular about the cooking, voicing her criticism when it was necessary.

Thomas Presley cared for both Grant until he died in 1953 and Carolyn until she died in 1967, using the medical knowledge from his dental school years to tend to them.  For several years after Carolyn died he continued to care for both the house and the yard until his own failing health forced him to stop.