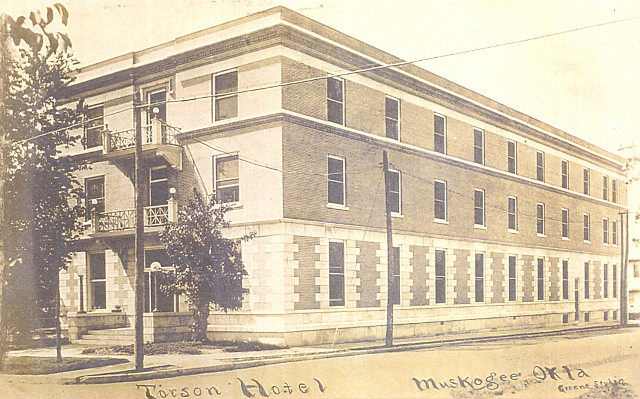 Muskogee's Torson Hotel
﻿
﻿
The opening of the Torson Hotel at 6th and Boston in Muskogee was reported in the Muskogee County Republican newspaper on 15 September 1910. The brief announcement said: "It is a modern hostelry, and will be conducted with an eye single only to the comforts of its guests." Thomas A. Johnson and J. B. Torrans built the structure and operated the hotel.

The Torson was considered a family hotel, temporary home to Muskogee visitors including traveling theatre troupes, as well as permanent home for local families and businessmen.  Frequent events occurred at the Torson, including bridge parties, wedding and engagement receptions, and numerous meetings and conventions as well as private parties in the family suites.

In March of 1911, such a large event was held that a riot almost ensued.  An article in the Muskogee Times-Democrat shouted: "Cabbies Run Over Lawn" and explained: "So sharp was the competition for trade among the cabbies lined up on the street in front of the Torson hotel last night that it required the presence of police to quell the small riot that threatened as each and every cabman insisted on driving his carriage in the same location, the walk leading to  the entrance of the hotel. A reception was on at the Torson and the guest list was large and distinguished. When the festivities were over and the guests called for their carriages, the cabbies all came in a bunch, until the street entrance was congested with hacks and even the lawn was driven over by the ambitious cabbies who saw visions of short drives and big tips.  Patrolman Bailey headed the platoon of police officers who tried to straighten out the muddle between the cabbies." .....Muskogee Times-Democrat.

Large conventions at the hotel were common. On 27 March 1912, The Muskogee Times-Democrat reported: "Floating above the stately entrance of the Torson hotel, the stars and stripes waved in the breeze today while within one hundred women, members of the Daughters of the American Revolution were entertained. The occasion was the coming of the state chaper of the D.A.R. which convened in Muskogee today."

The Torson was a busy place in bustling downtown Muskogee until in early 1917 the owners began negotiations with the Bedouin Temple for purchase of the "famous hostelry at the corner of Sixth and Boston for use as a home for the shrine" for $43,000.

Today, the Torson Hotel is gone from the south west corner of 6th and Boston but the property is still used by the Shrine.